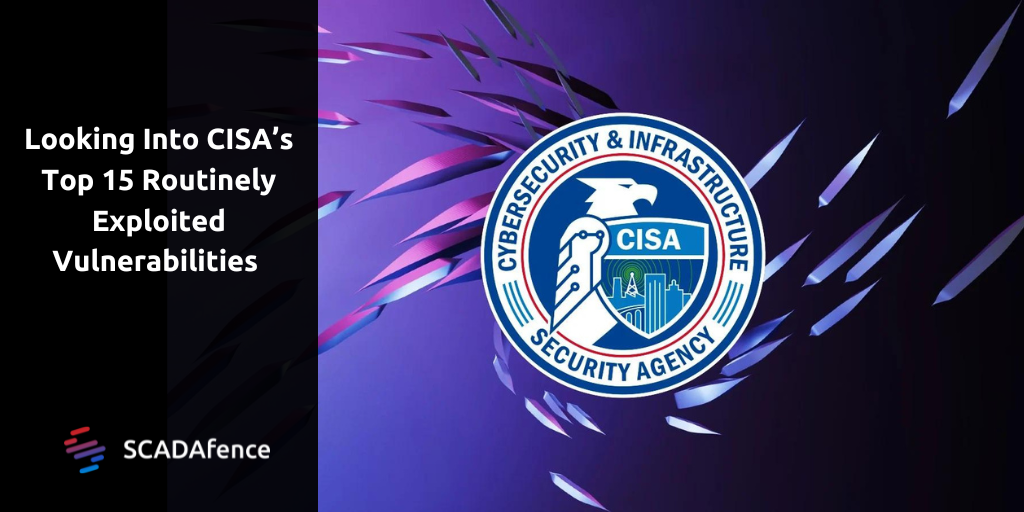 On April 27, the Cybersecurity and Infrastructure Security Agency (CISA), published a joint advisory in collaboration with CSA/NSA/FBI/ACSC and other cybersecurity authorities, providing details on the top 15 vulnerabilities routinely exploited by threat actors in 2021,and other CVEs frequently exploited.

Unpatched devices and systems can serve as an easy network entry point for threat actors, as they provide attackers with a reliable and efficient Initial Access method. A number of these vulnerabilities were seen as a part of ransomware attack vectors, one of today’s top threats to operational technology.

Many of these vulnerabilities share characteristics that make them widely exploitable: They affect widely used systems, where the vulnerability can be present in multiple systems.

In the past year, threat actors targeted internet-facing systems, such as email servers and VPN servers, with exploits of newly disclosed vulnerabilities. For most of the top exploited vulnerabilities, a proof of concept code was released within two weeks of the vulnerability’s disclosure. (Read more about when to patch or not patch, here).

Malicious threat actors continued exploiting publicly known vulnerabilities, demonstrating the continued risk to organizations that fail to patch software in a timely manner or are using software that is no longer supported by a vendor.

Following are the most exploited vulnerabilities:

The SCADAfence Platform can help identify where the network is exposed to potential risks and match between exposed assets and their relative vulnerabilities.

Additionally, the User Activity Analyzer can be utilized to track any propagation attempts by malicious actors.

The SCADAfence Platform detects exploitation attempts of the following vulnerabilities:

The SCADAfence research team is constantly monitoring newly disclosed vulnerabilities, as well as routinely exploited ones, and working to continuously improve the platform's vulnerability detection abilities.

Our researchers recommend taking the following measures to minimize the risk of exploitation:

Additional recommendations include updating your software, operating systems, applications, and firmware on IT network assets in a timely manner, while prioritizing patching known exploited vulnerabilities.

If you’re not a customer yet and would like to see how this works from up close, you can watch a short demo here.