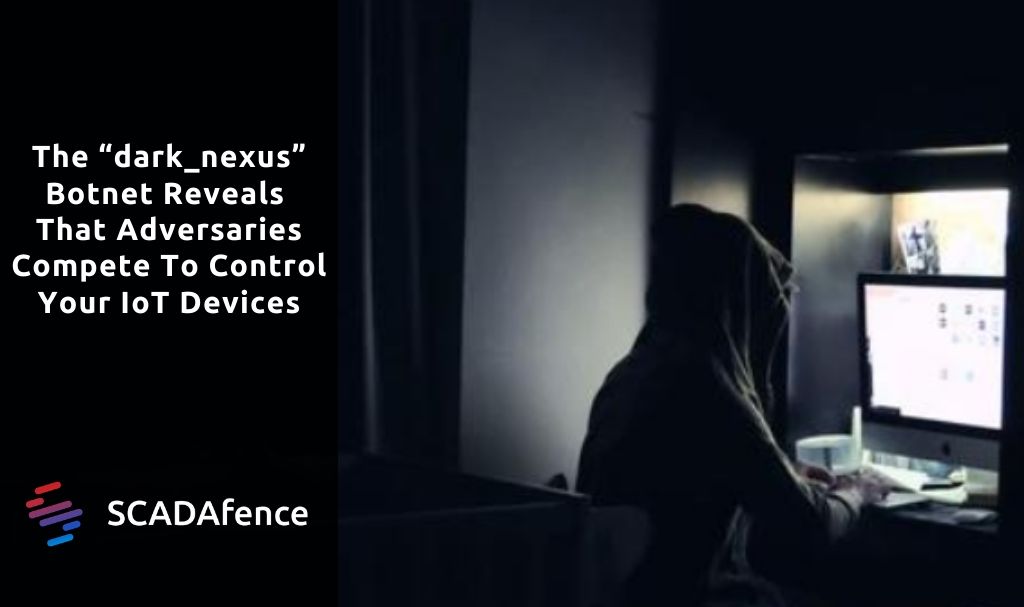 In a recent blog post, I wrote about the fertile ground of insecure IoT devices, and their use by adversaries such as cybercriminals and defense organizations such as Russia’s FSB. One of the motivations of IoT attacks is to use their internet connection in order to run botnets and DDoS (distributed denial-of-service) attacks.

In the famous Mirai malware campaigns, IoT devices have been compromised and were used to perform a massive DDoS attack at a global scale, one that caused major internet disruptions.

Since it has been published as open source software, malware developers have been able to learn from it and build upon its success. Like a biological virus, Mirai has new “strains” - either direct descendants (using a similar codebase) or just attackers copying the same TTPs to emulate Mirai’s success.

“dark_nexus” is a new Mirai descendant IoT botnet that has been discovered by Bitdefender researchers. It emulates many of the tactics used by Mirai.

In this blog post, I’ll discuss the dynamics of the IoT Device takeover market and what it means for us, as the defenders of IoT networks.

Adversaries are competing amongst themselves on the control of IoT Devices, by optimizing a set of parameters that will yield the highest return on investment for their time and efforts.

The goal is to reach as many IoT devices as possible, as each IoT device can be monetized or be used for other purposes.

IoT devices have a very diverse set of operating systems and CPUs, and they might require special payloads in order for the malware to actually run on them.

It could be that a device is vulnerable, but the attacker can’t run the malware on it, since the CPU isn’t supported. This makes the cross-platform requirement very important in the cybercrime organization’s “product management” department.

Just like normal software vendors, adversaries have to prioritize their R&D and get feedback from the “field” (failed infection attempts).

IoT devices can be upgraded, rebooted or undergo other changes that will cause the malware to be removed or deactivated. Since attackers are putting a lot of efforts into gaining control over IoT devices, this is obviously an undesirable scenario.

Therefore, dark_nexus comes with persistency features such as hiding as the popular “BusyBox” utility, disabling the option to reboot or power off the IoT device, and then registers as a service that should be brought up after reboot.

When adversaries have done the legwork and got themselves control over an IoT device, they have a valuable asset in their hands that they want to protect from other adversaries.

Why would they want to share their precious resource with anyone else?

Interestingly enough, the need for supremacy aligns some of the adversary’s interests with the device owner’s interests. We’ve seen adversaries patch devices to prevent them from being attacked by other adversaries, and even fix IT issues, so that the device can continue its normal operation without being replaced.

dark_nexus for example, comes with a process monitor that kills unidentified, possibly invading processes, based on a calculated risk score. This protects the installed base from invasion by competing malware operators.

When the IoT asset is secure in the hands of the attackers, they start using it for the purpose they intended for it. (There are multiple purposes that adversaries have for IoT devices.)

The dark_nexus botnet has been intended for the following use:

What This Means for IoT Devices

IoT devices are becoming more and more popular. The threats to IoT devices keep evolving. The competition between malware developers will make them improve themselves, in order to achieve the following goals: